Hello everyone! It’s the first Friday of the month so I am going to talk about tabletop game development today. Specifically, the first expansion, Legends of Draxia: Corrupted Mana. I know many of you have heard me talk about it before, and some have even played it, but I wanted to make sure no one was left out of the loop.

First, I would like to talk about what is in the expansion. I added a new Resource called Lead, two new Buildings, an entirely new Corrupted Spell deck, and two new Characters. The new Lead Resource is used to purchase the new Corrupted Spells. The Corrupted Spells are played during an opponent’s turn to disrupt their actions, such as increasing a Monster’s Hit Points (HP). The new Buildings are used to produce Lead which can empower a Corrupted Spell. Empowering a Spell is a new mechanic added into the expansion. Each time the new Dark Citadel Building is exhausted, the potency of a Corrupted Spell increases, making it even more damaging to an opponent. In addition to these game play changes, there are additional Characters with new quests. 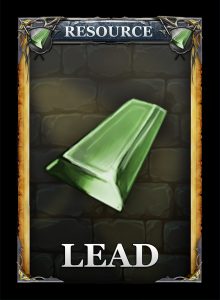 The new Lead Resource card
There are several reasons I created this expansion the way I did. First, the theme was actually decided by the Kickstarter Community. Our high-tier backers were given a vote on what theme they wanted for the expansion, and the consensus was Corrupted Mana. I decided on the core mechanics being direct PvP interaction in order to broaden the player base. I always intended to add PvP into the game since many gamers, myself included, enjoy more aggressive games. By creating Legends of Draxia in stages, I created a game that can be played by both passive and aggressive players. 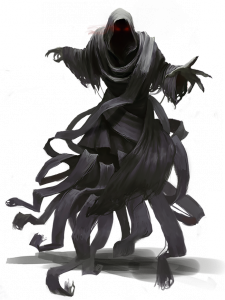 Running an early version of Legends of Draxia at a convention.

While working on the expansion I very carefully considered how new mechanics and cards would effect the base game play. For example, in the base game the Undead Monsters in general and the Wraith specifically, are statistically slightly overvalued. This is because I chose to use small whole numbers for ease of game play and end-game scoring. To help counter balance this fact, the Enrage Monster Spell in the expansion (which adds HP to a Monster) is most effective on the Undead since they have resistance to Bows.

The Corrupted Mana expansion to Legends of Draxia adds a dash of PvP, making it much less predictable than the original. Now it’s not just about maximizing Victory Points on each turn until the game ends. It is essential to watch what other players are doing, and work to convince them to attack someone else instead of you. The core of the game remains the same; there is simply another layer of strategy and depth to master.