A light-hearted party game in the genre of Euchre or Spades with some great gameplay twists. Players are attempting to cross into a country using a variety of Immigration paths to bypass a Wall. Ladders, Shovels, Vans, and Boats are used to win the Wall card – win enough of them and you win the game! Watch out for Tunnel Collapses, Reroutes, Speeding Vans, Broken Ladders, and Humpty-Trumpty. 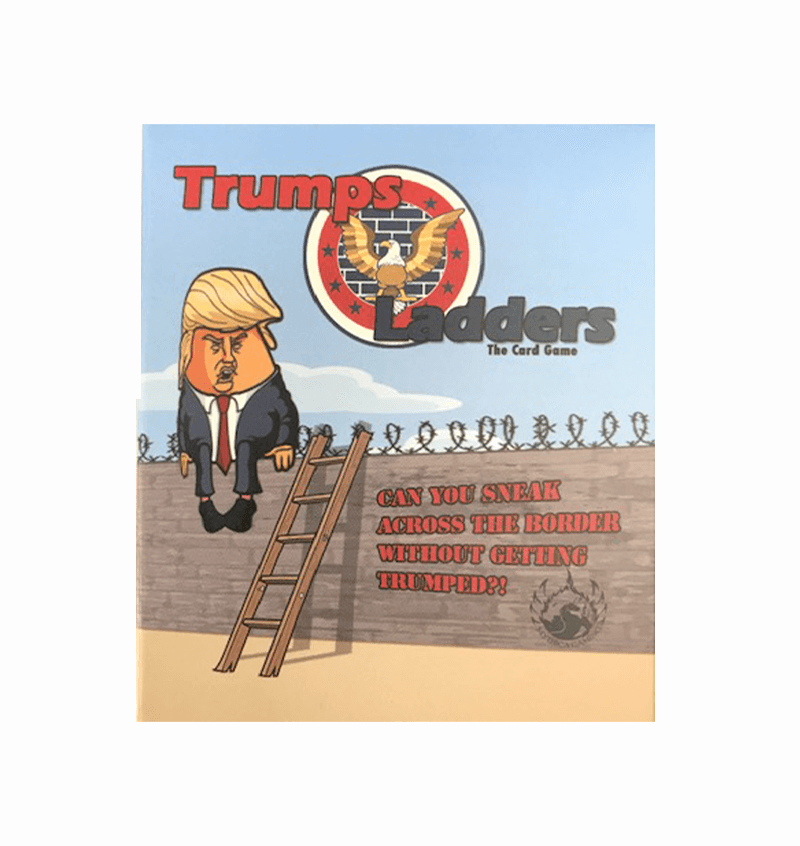 How can I buy Trumps & Ladders?

Trumps & Ladders is available here, and you should also check out your local game store as we are in some brick and mortar stores as well.

And of course, you can also buy Trumps & Ladders and other merchandise here in our shop.

Yes! If you run a game store and want to carry Fates of Madness send us an email and we will happily discuss wholesale pricing. You can reach us at business@mythicagaming.com

This game is designed for 2 to 6 players.

We recommend ages 10 and up.

Learning only takes 5 to 10 minutes. A few rounds of play and you’ve got it! An average game takes 15 to 30 minutes to play based on the number of players and their level of gaming experience.

Why would you even make this?

Last year, a friend of Jimmy’s came over excited because he’d thought of a new game title. “I have no idea what the gameplay would be, but I have a fantastic idea for a title! I want you to create a game called Trumps and Ladders!” After an initial round of laughter and wordplay possibilities, Jimmy declined. He didn’t want to risk offending anyone.

But – Jimmy makes games. With some prodding, he gave us a prototype just for us to play. He created a light-hearted party game in the genre of Euchre or Spades with some great gameplay twists. With the “suits” of Van, Shovel, Ladder, and Boat, king-making, if-I-can’t-win-nobody-wins, and an old-maid mechanic – it’s just a blast!

We decided it was too much fun not to share and convinced Jimmy to let us take a prototype to some conventions. Jimmy was nervous. We know a game named Trumps & Ladders has immediate political connotations.

The feedback from playtesting decided for us. So many asked us to bring it to production. On a number of occasions even offering to buy our demo copies.

So here we are – inviting you to check out Trumps & Ladders for yourself. It’s just a game. It’s just a lot of fun!