Corrupted Mana is the first expansion to the HIT GAME Legends of Draxia. Corrupted Mana is an aggressive player vs player expansion, filled with an arsenal of spells that are sure to cripple your opponents. Two new characters are being introduced who are as corrupt as the mana itself.

The new Lead Resource is used to purchase the new Corrupted Spells. The Corrupted Spells are played during an opponent’s turn to disrupt their actions, such as increasing a Monster’s Hit Points (HP). The new Buildings are used to produce Lead which can empower a Corrupted Spell. Empowering a Spell is a new mechanic added into the expansion. Each time the new Dark Citadel Building is exhausted, the potency of a Corrupted Spell increases, making it even more damaging to an opponent. In addition to these game play changes, there are additional Characters with new quests. 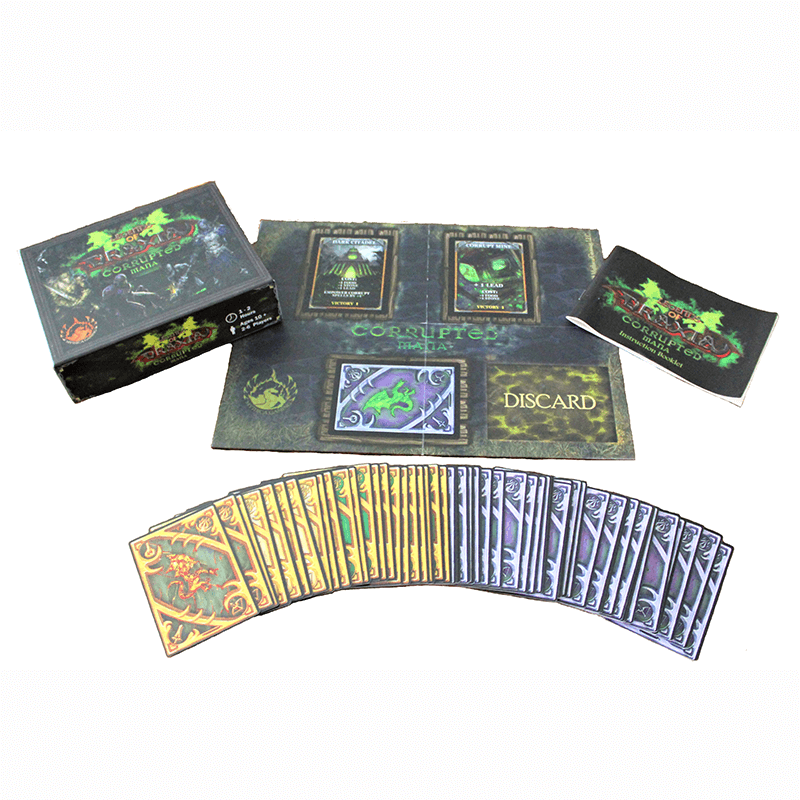 The theme was actually decided by the Kickstarter Community. Our high-tier backers were given a vote on what theme they wanted for the expansion, and the consensus was Corrupted Mana. We decided on the core mechanics being direct PvP interaction in order to broaden the player base. Jimmy always intended to add PvP into the game since many gamers, himself included, enjoy more aggressive games. By creating Legends of Draxia in stages, we created a game that can be played by both passive and aggressive players.
Yes, I want to try Corrupted Mana

How can I buy Corrupted Mana?

Legends of Draxia is available here, and you should also check out your local game store as we are in some brick and mortar stores as well.

And of course, you can also buy Legends of Draxia merchandise here on our Shop page.

Yes! If you run a game store and want to carry Legends of Draxia’s expansion, Corrupted Mana, send us an email and we will happily discuss wholesale pricing. You can reach us at business@mythicagaming.com

The card game is designed for 2 to 6 players. However, if you want to play more than 6 players, you can take to games, smash them together and play up to 10 people!

We recommend ages 10 and up. However, we have had children as young as 7 successfully play the game.

Learning only takes 5 to 10 minutes. A few rounds of play and you’ve got it! An average game takes 30 to 45 minutes to play based on the number of players and their level of gaming experience.

Is this an expansion?

We’re working on the second expansion, Monsters of Nairu, which adds a semi-cooperative element to the game. You can playtest it at conventions with us, and see the Monster art on our Shop page. Expansions 3 and 4 will be coming out in the next few years, each adding new characters and new gameplay. Join the Newsletter to keep up with what’s coming out when!