Draxia: The History of Humans

Hello everyone, and welcome to Draxia lore week! Today’s topic is about the human history of Draxia: what human society was like pre-magic, the fall of civilization, and the current situation. Due to the paradigm shift caused by the discovery of magic, the calendar dating system is based on the year magic was discovered: before Enlightenment (B.E.) and After Enlightenment (A.E.).

During this time period, the human species transitioned from a hunter-gatherer society to an agrarian one. Small towns grew into cities, and eventually into city-states. Human settlements covered the continent, ranging from the mountains to the ocean. The most powerful of the city-states clustered around an enormous fresh-water lake. A handful of rivers flowed into the lake from the mountains, and a few rivers flowed from the lake to the ocean. These waterways were instrumental in the prosperity of the cities surrounding them. Unfortunately, it was this very prosperity that led to their ultimate destruction.

The discovery of magic was linked to the refinement of precious metals. The mana produced during these years was weak and barely noticeable. It took centuries before it was discovered how to craft proper mana pools. The early mana pools were simple bowls made from gold. The crude design meant that it took days to concentrate, and the mana produced was weak. Metals such as copper and silver were incapable of concentrating mana in these simple mana bowls.

*Not Draxia* (Just a cool map)

Initially the use of magic was simply a novelty. It cost an exorbitant amount to produce, and talented magic users could do little more than start a fire with it. The use of magic remained a novelty until mana pool design was refined sufficiently to create better mana out of cheaper materials. With the creation of cheap mana, the use of magic became widespread nearly overnight. The high demand for mana led directly to the fall of civilization. 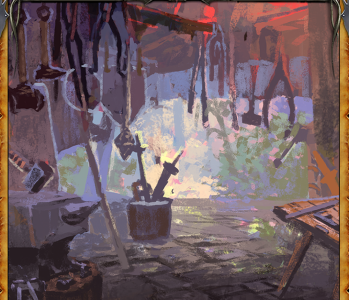 In response to the demand for mana, the powerful central city-states began construction of massive mana pools. These pools were made primarily out of lead because it was cheap and readily available. The use of lead to create mana was brand new. No one knew it would corrupt the mana. By the time they discovered that exposure to mana created by different metals impacted the results, it was too late. The central city-states began to fall as the twisting influence of the corrupted magic took hold. By the end of this era, humanity was splintered and the wilderness began to retake much of the known world.

Very little happened during these centuries. Most people lived in small towns cut off from each other. Travel between towns became dangerous as wild animals and other humanoids, such as orcs created by the corrupted mana, began to thrive in the wilderness. Eventually, though, pockets of humanity grew large enough to begin retaking lost trade routes. Most shipping routes traveled along the ocean coastline. The river routes were avoided since they traveled through and around the ancient corrupted cities. 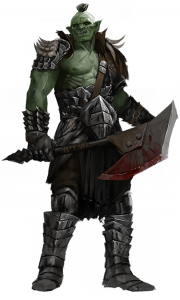 Travel between towns was dangerous.

As the wealth of towns began to grow, so did magic. The reopening of mines saw a large increase in the amount of precious metals available for mana production. The founding of Wizard Guilds helped to safeguard against the improper use of magic. The use of magic eventually became common practice for all. Most people use magic to help in daily life. However, some gifted individuals are able to perform great feats of magic such as teleporting over hundreds of miles. With this new found power, mankind is beginning to retake what they had lost. This new age of exploration and adventure is where we find our heroes now.
Want to try The Draxia RPG for yourself? Click the button below to get started!
Yes, I want to try the Draxia RPG!